What's the Best Marijuana to Help You Sleep?

Pot smokers have known for a long time that cannibas can help you get to sleep. Now, scientists are trying to learn what kind of pot works best. 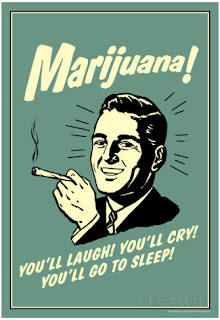 The answer in a moment.

A new study checked various types of medical marijuana for its sleep inducing powers among pot users who employ the drug specifically for insomnia as well as nightmares. Of 163 adults questioned, researchers found that those trying to rid themselves of nightmares preferred sativa strains to indica strains. Among those using pot for insomnia, they found no preferences.

However, the researchers also examined the content of specific cannabinoids such as THC and CBD. THC is pot's primary psychoactive compound and CBD, aka annabidiol, is another compound found toe
The scientists also examined the types of pot that participants used for their content of specific cannabinoids such as THC and CBD. THC is marijuana's primary psychoactive compound (it gets you high) and CBD (cannabidiol) is another compound (it doesn't get you high), known to help children suffering from epilepsy.
Here's the bottom line: Those smokers who said they had insomnia were more likely to use pot with higher concentrations of CBD. The researchers point out that they only looked at people's preferences and not whether or not these specific types of pot
It is important to note that the study merely examined the people's preferences, but it did not compare the medical objective effectiveness of the different types of marijuana for sleep-related problems. In other words, scientists didn't test to see if people were taking the most effective type of marijuana – using clinical trials - although it's common for patients to use what works. This generally is true for pot or any other medicine.
As for clinical work, David Goldstein, the CEO of Potbotics, a medical marijuana company said that the cannabinoid that has shown the most promising attributes for sleep is CBN - cannabinol. Other research seems to back that claim.
According to Steep Hill laboratories: "CBN is either non-psychoactive or very mildly psychoactive. It reduces intraocular pressure in the eye (similar to D9THC), so it can be used in the treatment of Glaucoma without the psychoactive effects of THC. CBN is synergistic with THC for treatment purposes. CBN also fights free radicals in the bloodstream, and it performs similarly to THC in pain reduction treatments."

Of all the cannabinoids, CBN appears to be the most sedative. Not only is it sedative, it takes very little to do the job. The consumption of 2.5mg to 5mg of CBN has the same level of sedation as a mild pharmaceutical sedative, with a relaxed body sensation similar to 5mg to 10mg of diazepam. CBN is synergistic with both CBD and D9THC for inducement of sleeping, and when mixed in the correct ratios, CBN becomes an effective sleep aid of 5-6 hours duration."

In other words, CBN puts you to sleep but you don't get high along the way.
Posted by Ken Mallows at 8:28 AM