Do Pets in the Bedroom Help You Sleep Better?

Maybe. Researchers are not quite sure, because pet owners love their pets and are reluctant to blame them for their sleeping woes. 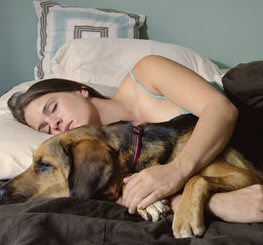 A recently published study by Mayo Clinic researchers found that more than half of pet owners, about 56 percent, allowed their dogs or cats to sleep in the bedroom. Of those, 20 percent said the pet disrupted their sleep, and 41 percent perceived their pets at unobtrusive or even beneficial to sleep.

The research is particularly important because pet ownership is at its highest level in two decades with dogs being the most popular at 36.5 percent of households and cats, 36.5 percent. The authors note: "High levels of pet ownership raise questions of where pets sleep and the implications for their owners' sleep." They also note that literature searches did not yield any published reports about pets and sleep so more work needs to be done.

On the plus side, pets in the bedroom provided security, companionship and relaxation for some people.  The report noted:

"A single 64-year-old woman commented that she felt more content when her small dog slept under the covers near her feet. One married woman described her 2 small dogs as 'bed warmers.'  One 50-year-old woman did 'not mind when my lovely cat' slept on her chest and another described her cat as 'soothing.' Patients volunteered that they deliberately acquired a dog or cat to help them relax. People sleeping alone, not always single but sometimes with a partner who travels or works some nights, more often spoke of the beneficial companionship stemming from a pet in the bedroom or on the bed."

On the negative side, some pet owners were disturbed by their pets who wandered around, snored, needed to go out, whimpered and even had seizures. "A single 51-year-old woman kept a parrot in her bedroom that consistently squawked at 6 am."

One drawback of the study was that of the 150 patients from the Mayo Clinic in Arizona Center for Sleep Medicine who answered a questionnaire, many may have been reluctant to bad mouth their beds and blame them for sleep problems. The report stated: "Some pet owners described an intense loyalty to their companion animal. Respondents appeared eager to disclose whether they owned a companion animal and where it slept but seemed more reluctant to reveal any undesirable consequences. This response bias may have resulted in these data underreporting the frequency of disrupted sleep."

The researchers suggest that patients with sleep problems should tell their healthcare provider or sleep specialist about their pets' sleeping conditions as it may be a factor. "People should be counseled to prioritize their sleep over the needs of their companion animal," the report stated. "The decision to bring a pet or pets into the bedroom or bed should come only after a close examination of the implications for their sleep environment. Future research in this area could include looking at whether patients who own pets who were counseled subsequently slept better, as well as using more objective measures of sleep for people with a companion animal in the bedroom."

The study titled "Are Pets inthe Bedroom a Problem?" was published in Mayo Clinic Proceedings, October 15, 2015.
Posted by Ken Mallows at 7:00 AM